Rocks of Adršpach and Teplice 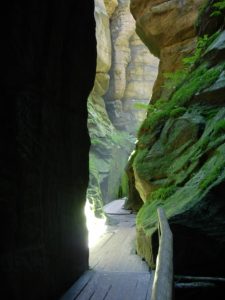 The sandstone rock towns at Teplice nad Metují and Dolni Adršpach are without doubt one of the most beautiful places in the Czech Republic. Not without good reason designated as a protected natural area by UNESCO. The vast rock labyrinths, the passageways through deep, cold gorges and the panoramas from the peaks and the rock faces are all waiting for you!

The well marked routes will lead you as you hike through the rocks and the area of Adršpach / Teplice. This rocky region is a national nature reserve. The routes are open all year; an entrance card is required from April to October. It is possible to trek through the area on horseback, and boat trips are offered on the lake

But there is much more to the Broumovsko region. The lovely valley, surrounded by forested hills in north-east Bohemia, captures the hearts of its visitors with its tranquillity, beauty and unspoiled nature. The town of Broumov (formally Braunau) is the cultural, economic and administrative centre, with important historic buildings. One thing that is particularly special about this region is that, by dint of history, it has never been industrialised. So there is plenty of clean air and unspoiled nature.

During your expeditions in the region you can make use of well marked hiking and cycle routes in order to discover not just the historic buildings and stunning nature, but also the individual character of the villages. The Broumov region has been designated in its entirety as a protected natural area since 1991. The towns of Broumov, Meziměstí and Tepliče nad Metují are easy to get to by train, bus or car. This region borders with Poland on 3 sides, so it is easy to combine staying in the Broumov region with discovering the places of interest within the border region on the Polish side.

Broumovské stěny is a roughly 12 km long irregular, picturesque mountain ridge filled with amazing rock formations and rugged gorges. This area of sandstone blocks has a network of tourist hiking routes which vary in length and difficulty. The most important route follows the various mountaintops and affords many stunning vistas over the valley of the Stenava river. In good weather you can see the Karkonosze mountains in the distance with the Śnieżka, the highest mountain in the Czech Republic. 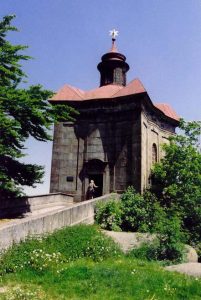 At the top of this chain of mountains is a stone chapel, designed by K.I. Dientzenhofer. This chapel is star shaped. From here there is a footpath with the most beautiful views of the Broumov Valley and the surrounding hills and mountains. The Swiss chalet situated next to it is now a restaurant. Rock climbing is only permitted in the marked sectors. The Broumovské stěny are also suitable for cyclists. There are several kilometres-long routes for mountain bikes and cross-country cycling.

This mountain chain – 25 km long – is the forested border on the north side of the Broumov region. The hiking route along the border follows the crest of the Javori mountains. The maple is famous for its autumn colours.

The viewpoint, built at the top of the Ruprechtice Spicak (880 m. high), is open all year and offers splendid panoramas over the region of Broumov, Ostas, Stolowe mountain, Eagle Mountain, Turov, Adršpach/Teplice rocks, Rychory hills and the Karkonosze mountains. There are also vistas on both the Czech and Polish sides of this hiking route. The most popular resort is Janovičky, the centre for hiking and skiing within the Javoří mountains, with a border crossing to Poland for hikers and cyclists and with various places to stay or to dine. It is possible to explore part of the mountains by mountain bike or cross-country bike, via a 27 km long cycle route.