The Czech Republic, which has been independent since 1 January 1993, entered the European Union on 1 May 2004. As a former Eastern bloc country there is still a lot to to be done in the Czech Republic. But the positive nature of the circa 10.5 million Czechs has already brought the country a long way forward. It is now firmly on the map as a destination for holidays. And not without good reason. The Czech people are extremely hospitable. 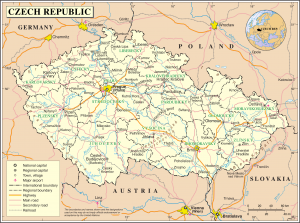 The country is approximately 1.9 x as large as the Netherlands (2.6 x Belgium), which means, given the number of residents, that it is much less densely populated than for example the Netherlands.

The distance from Utrecht-Vižňov is approximately 950 km.

The national currency is the Czech crown, the Koruna (CZK) which is made up of  100 haléru. 27 CZK were worth ± 1 Euro on 20-03-2017. An appealing feature for the average Netherlands resident is that prices are significantly lower in the Czech Republic than in the Netherlands. Whilst everything is available in the shops, from luxury household apparatus to a wide range of basic necessities. Dobrý den! (Hello!).