The Czech Republic is becoming more and more popular as a  wintersport destination. Above all the Karkonosze mountains are held in particularly high regard. Not least because of their affordability!

Wintersports fanatics who are used to the pistes in France, Austria or Switzerland may well find the skiing in the Czech Republic less challenging. On the other hand there is no doubt that the Czech Republic offers many advantages for beginners and family winter holidays. 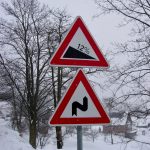 In the area surrounding Vižňov there are countless possibilities for cross-country skiing, snowboarding, tobogganing and skiing, on both the Czech and the Polish sides of the border.

For cross-country skiing and everyday fun in the snow there is plenty on offer in and around the village. The undulating countryside offers a wide range of possibilities. We have drawn up a list (below) of the ski facilities in the area. There is also a map of cycle routes in the house (!) Which shows where all the ski lifts are.

Oh yes, make sure you have winter tyres and/or snow chains! In our experience these are definitely not a luxury 🙂 on roads with a gradient higher than 12%.

THE SKIING OPTIONS IN THE REGION:

Teplice nad Metuji Known for its stunning rock formations. The closest place to go for skiing (approximately 13 km). With a ski lift, and lit in the evening. Route: follow the signs for Teplice n.M.; When you arrive at the main square in Teplice take the road towards the left, passing under the railway line; pass over the railway line after 200 m, and then turn left after 200 m, up over the green bridge, then turn right towards the car park.

Janovičky (pronounced like Yanovietsyki) – This village is approximately 15 km from the house and has 2 drag lifts and a separate circuit for snowboarders.

You can hire equipment at the restaurant situated right next to the piste. Route: drive out of the village, turn left, follow the road through Hincice; in Olivetin (Broumov) turn left and follow road 303.

Poland – The closest ski pistes in Poland are 18-20 km away in Unisław Śląski and Rybnica Lesna. The Andrzejówka guesthouse which is situated directly next to the piste is known in the Netherlands due to the fact that Queen Wilhelmina stayed there with Princess Juliana for 14 days in February 1936. At that time the house was called Andreasbaude and the place where it stands was still part of Germany. Route: towards Walbrzych, after Kowalowa turn right towards Sokolowsko (there is a large sign for Andrzejówka); follow the signs.

In addition there are ski lifts in the region in Police nad Metují at 16 km distance (just before Police on the left-hand side of road 303) and in Machov (22 km).

In Radvanice (28 km) there is skiing: • • pistes and cross-country skiing; there is also a restaurant here. In Petříkovice at 30 km there are 2 ski lifts. A little further (32 km) on the other side you will find the village of Sokolec Klodzko in Poland’s Sowie mountains. 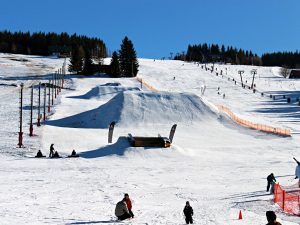 Wintersporters who are looking for more of a challenge will need to drive slightly further. In the Karkonosze mountains (Krkonoše) you will find, among others, Mladé Buky (at 46 km; skiing:• •), Janske Lazne (at 52 km, with a 2400 m long piste, ski lifts and gondola) and Pec pod Sněžkou (at 61 km, with the highest mountain in the Czech Republic; skiing: • •).